DARK Act To Be Voted On In The House Next Week!!

“The Safe And Affordable Food Act”  is also called the “Monsanto Protection Act of All  Times” or the “Deny Americans The Right To Know” (DARK) Act.  Whatever you want to call it, it’s moved out of the Ag House Committee and will be voted on next week on the House floor.

We have to do our best to get as many NO votes as we can.

What does DARK do?

3-      Basically prohibits the FDA from doing its testing and labeling job and puts in place a voluntary labeling scheme that folks will have to pay for. NonGMO Project would be outlawed in favor of this USDA program.  Will they test?

4-      Takes away States’ rights to control their agricultural practices and seeds. This would pre-empt any local moratoriums and bans on growing GMOs

5-      Does not require labeling, only allows for voluntary labeling which has been in place since 2001 with NO ONE ever labeling.

If this goes to the Senate…the good news is that there is no concurrent bill there so far.  We have got to make sure we have a ton of NO votes to make a statement to the Senate that we want this bill to die NOW.

Will you be part of a team to visit your rep?  If so, please contact Pamm Larry by replying to this email and I’ll see how many folks we can gather.

If you cannot visit, please make multiple calls. Find your rep at  http://www.house.gov/representatives/find/ then call his DC office.  If you’d like some talking points, these are the best I’ve seen for DARK.

Please add your voice!  We need all of us to make calls and/or visit our reps to make sure that they hear us loudly and clearly. We’ve done a great job and have had many victories. Let’s not let Monsanto, Syngenta and the Grocery Manufacturers bypass the will of 90% of the population.  Vote NO on HR 1509, YES on the DeFazio bill HR 913.  We want real labeling, not a greenwashing program.

Thanks and see you on the streets!

will be voted on in the House next week!!!

H.R. 1599,  also known as the DARK Act (Deny Americans the Right-to-Know Act)  is designed to destroy the GMO labeling movement.

Rep. Mike Pompeo ( Republican- Kansas) and his friends from the Bio Tech industry have deceitfully designed and named the bill the “Safe and Accurate Food labeling Act of 2015.”

HR 1599 Preempts any state and local labeling requirements with respect to bioengineered food, does not mandate labels nationally, only solidifies the current policy of voluntary labeling and allows for GMOs to be labeled “natural”.  An new provision would take away states rights to control seeds and disallow counties from banning the cultivation of GMO crops.

Ask your representative to support HR 913  the Genetically Engineered Food Right-to-Know Act,  “ Not ”   HR 1599,  also known as the DARK Act.

Great talking points for both liberals and conservatives can be found here:  HR_1599_fact_sheet_(1)
Please call today and multiple times. Ask your friends to call their Congressmen.  If this passes the House with a big win, the Senate will follow with a law, either a bill or as a rider in an Appropriations bill.

Find out if YOU have Roundup in your body!!

Get your Test Here

The most widely used herbicide in the world is Roundup. Its active ingredient is glyphosate. Thirty five years ago, Monsanto had studies showing potential harm to humans. And for all those decades Monsanto has been telling us roundp.jpgRoundup was perfectly safe.
About a month ago, the International Agency for Research On Cancer (IARC) of the World Health Organization came out with the announcement that they were reclassifying glyphosate to a 2A rating of “Probable Carcinogen”. According to Dr. Mae Wan Ho and Dr. Nancy Swanson, “… a classification of 2A in cancer-causing potential for glyphosate on the IARC is almost the highest possible categorization.” Read more here.

The USDA has reported that glyphosate is in our water and rivers. Eighty percent of GMOs are “Roundup Resistant.” This means they are engineered to withstand multiple applications of roundup and still survive. NonGMO crops, such as wheat, sugar cane, legumes and more, use it as a desiccant to have crops “mature” all at the same time for ease of harvesting. It is sprayed on playgrounds, schoolyards, alongside roads, lawns, sidewalks. It’s everywhere.
Ever wonder if it’s in your body? Or more importantly, your kids’ bodies?
For the first time ever, our movement gets to unite and do a crowd funded study on the prevalence of this probable carcinogen in our population. This project is being brought to us by “Feed The World” and Organic Consumers Association in the US.

What will testing do for us?

Find out more about glyphosate testing and taking part in a historic study that will let you know if you have this probable carcinogen in your body. In addition, you’ll help humanity and the planet by contributing to the body of knowledge that will help us get this poison banned.

Bit by bit we are uniting to create a safer, less toxic world for our kids and their kids. Please join us and be part of the solution! The study is crowd funded. Your test will cost $119.  If you sign up here, $5 will go to Labelgmos.org to help educate California on GMOs and food justice.

Ever wonder if we would have won Prop 37 if folks knew who was spending that $45M on confusing ads?  AB 700 will require the real money to be clearly identified on ads.  This is the first step in cracking Citizen’s United. It matters!!

Check in on the latest updates here and find out what you can do at  http://www.yesfairelections.org/

For more information on the TPP please visit here.

When you call for labeling, tell them NO FAST TRACK on the TPP!!

From Flush the TPP   http://www.flushthetpp.org/ 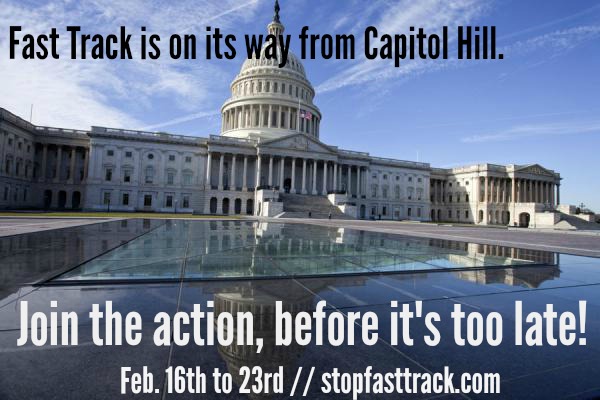 Word is that a new version of Fast Track will be introduced when Congress comes back from recess this month. Now is the time to let members know what’s in store if they vote for dangerous, corporate-backed trade deals. Be part of the resistance, and join the Presidents’ Day Week of Action

This year’s attempt to Fast Track unjust trade agreements is around the corner. We’ve got just a couple weeks to make our voices heard over the promises of multinational corporations, and starting Feb. 16th, people in key districts will ring out the call for members of Congress to commit to voting NO.

Check out our action map to join one of the 18 events happening across the country next week. If there isn’t anything in your area, make plans to hold your own emergency rally, call-in, letter drop-off, flyering session, or other event today!

From people’s forums to two-state bus tours, communities throughout the U.S. are coming out strong to stop the latest round of Fast Track legislation. It’s now or never in this critical moment for trade justice, and we know our action can make all the difference.

With thanks for all you do,
The Flush the TPP Team